Heather was in for a surprise whilst walking the pooch this afternoon when some heavy breathing  nearby caused her to look with some alarm into the river. 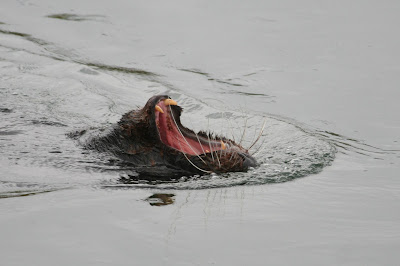 We are 10.2 kilometers up the river from the sea and so it comes as some surprise to come across a New Zealand fur seal enjoying a swim more-or-less in our back yard. 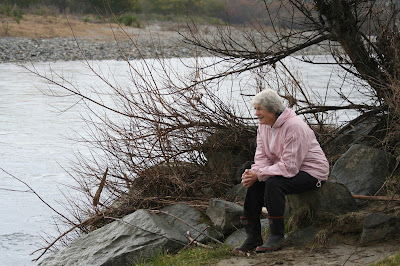 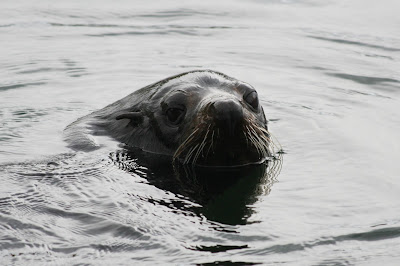 The fishing must be good to entice him so far up-river.
Posted by West Bank Dave at 17:15 No comments:

Email ThisBlogThis!Share to TwitterShare to FacebookShare to Pinterest
Crikey! Here we are in August already!


Heather and I decided that building a shed with hardwood poles for posts and 4.8m long half-round pine poles for beams would make a good winter project and so after a few false starts due to weather and other issues, we were able to get stuck in by the second half of July.

First we had to dig the holes down to almost the length of the shovel handle and plonk the heavy hardwood poles in, shoring them up to the perpendicular until we were able to mix the concrete and tip it in. 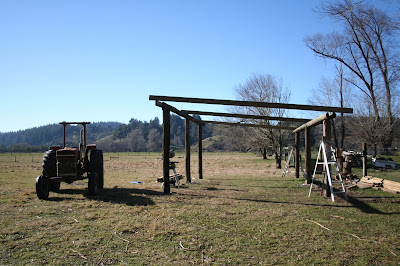 We had to use our heads to get the heavier stuff aloft, as, with a combined age of nearly 140 years, the green timber was bit too heavy for us. Cunningly placed ropes and the power of the tractor and/or the farm bike were enough to get things standing up. Son-in-law Daniel lifted the last four rafters into place as if he was placing broom handles there. Such are the joys of youth, eh! 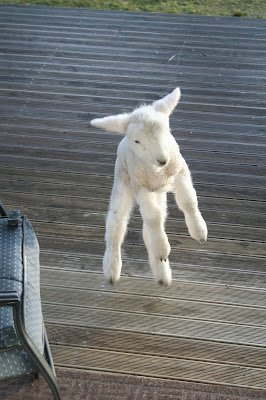 A new member of the family only temporarily distracted us. Here he is thinking about his next bottle. 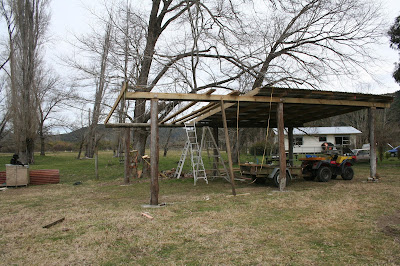 In an effort to remain dry between rain squalls, we placed the corrugated iron on as soon as the rafters and purlins were in place. The purlins were put between the rafters to deny any roosting place for birds. 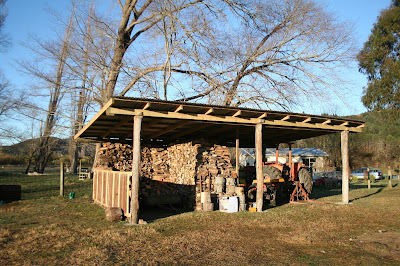 Finally, on what would have been my father's 101st birthday, the shed was finished and we had transferred all of our firewood in, and the tractor finally has a place to call home out of the weather.
Posted by West Bank Dave at 16:56 No comments:

January passed uneventfully apart from more rain than we were used to; 5 mm of rain for January 2015 provided some contrast to January 2016 when 303 mm fell. We didn't complain, and neither did the cattle who, for a change, remained hock-deep in grass for the summer.

In February, our youngest daughter convinced us to take a "stroll " on Mt Arthur, in the Kahurangi National Park. We have been ignorant of the fact that such spectacular scenery could be enjoyed so close to our back door - only 20 minutes' drive to the carpark at 2,900 feet ASL. [Note: I'm using feet for altitude as a: that's what I'm accustomed to, b: it is the standard for aviation and c: it's my blog.]  Five minutes from the car we spotted the cheeky (and destructive to cars - they pull the rubber seals out, and the wipers off) mountain parrot, the kea. 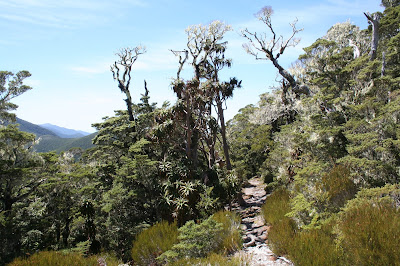 About 600 metres from the car the track forked, one branch heading up the mountain to Mt Arthur Hut, and the other down to Flora Hut. My daughter and my wife looked at the upward slope of the 2-metre wide track heading to Mt Arthur Hut, then they looked at the vehicle track heading down to Flora Hut, then they looked my svelte, slim (ahem) silhouette and decided that the Flora Hut option was  the way to go if we wanted to avoid the use of MediVac helicopters. 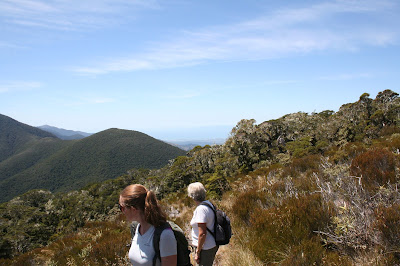 However, after an easy wander to Flora they decided that I was coping better than expected and we headed straight up the mountain and emerged from the bush at about 4,200 feet. 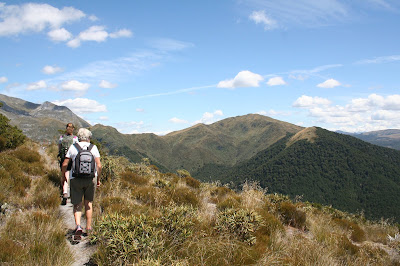 The track then led along a ridgeline for about a kilometre, and which undulated up and down by about 500 feet as we headed south toward Mt Arthur. 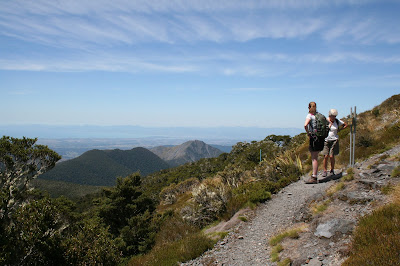 We eventually  came to a branch in the trail and we could choose to climb about another 150 feet to  a knoll with stunning views or sidle around to Mt Arthur Hut a hundred metres or so away. 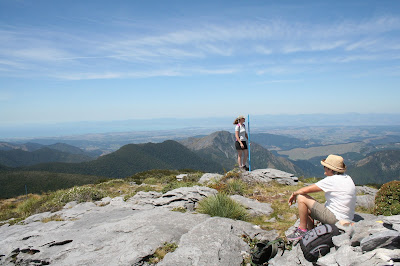 We opted for the view and some well-earned lunch. Nelson is at shoulder-height behind the blue pole. We decided not to continue another 3.4 kilometres and another 1,300 feet in altitude to the summit. We were quite happy to admire the view from 4,400 feet. 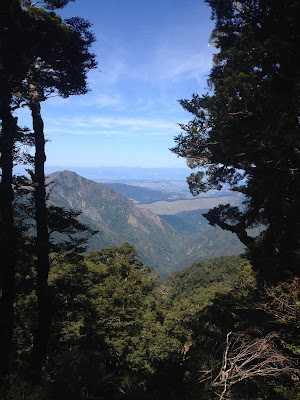 A final shot as we descended back to the car, and an hour later we were enjoying a cup of tea at home. The perfect end to an invigorating and thoroughly enjoyable 10 kilometre hike. No fathers were harmed in the making of this post!
Posted by West Bank Dave at 10:33 1 comment:

Time for a catch-up.

The days just seem to bowl on faster and faster at a rate faster inversely proportional to your age.
This post will sample a few events up until the end of 2015. 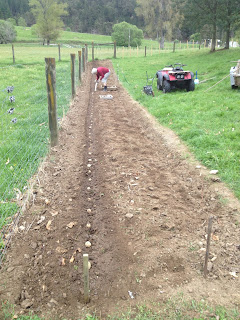 After planting some spuds at the end of October we treated ourselves to a visit to youngest daughter's husband's place of work on a dairy farm near Inangahua Junction. 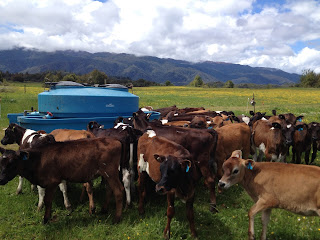 We were lucky with the weather as the place has a reputation for fairly high rainfall and many overcast days.

In December I paid a visit to Fiji where my son resides. Visited a vessel trialing the 24-hour surveillance system  instigated by the steering committee I attended in Rome last year. The trial systems are funded by UNFAO. 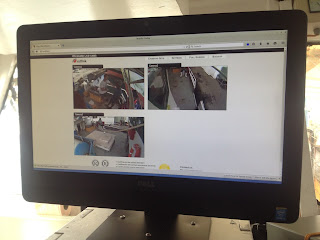 Three cameras watch over the hatch to the fish hold, the sea door where the fish are brought aboard and the stern where, on a long liner, the line is set into the water. 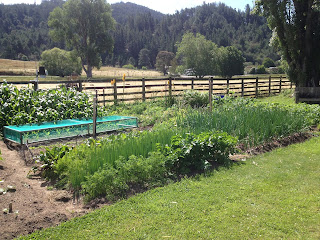 By mid-December the garden was taking off and we were already enjoying fresh peas picked from the vine. There's nothing better.

Hay making was in full swing in the neighbours' paddocks. 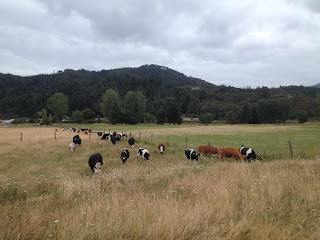 By the end of December the cattle were enjoying plenty of fresh grass, which was to continue right through into June, when frosts cut grass growth right back to almost nothing. 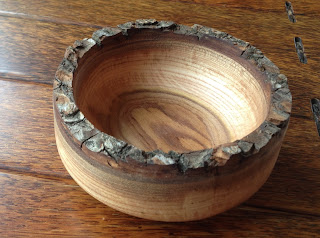 In mid December I bought a second-hand wood lathe, and the house soon started filling up with all manner of strange objects. Pictured is an early attempt in elm. Those that know say that you need 7 years' experience to be any good. Only 6 and a half years to go.... 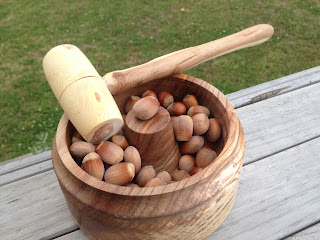 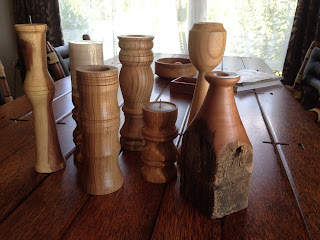 Elm, and on the right an old totara post. 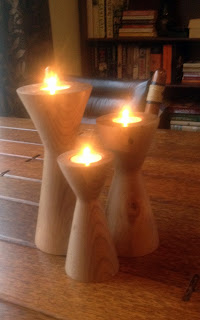 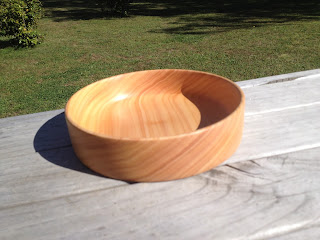 Macrocarpa
Posted by West Bank Dave at 20:21 No comments:

Yesterday, we took the opportunity to take an old friend from Fiji on a day trip around Golden Bay, which is accessed via a winding road over the 'Marble Mountain' that separates Golden Bay from the Waimea plains. The the road summit's altitude is about 2,600' (792m) ASL with superb vistas to be seen from strategically placed parking spots.

We have an old cemetery just over the fence from where we are living. It was, apparently, the original Motueka cemetery until the flood of 1877 when many graves were washed out and coffins were found even at sea. This flood caused the river to switch from flowing along the western side of the valley to flowing down the eastern side, cutting off access to the cemetery to the good citizens of Motueka town.

This is the time of year when the bluebells, the possible descendants of long-ago mourners' flower arrangements, show themselves and add some colour to an otherwise drab and unspectacular spot. 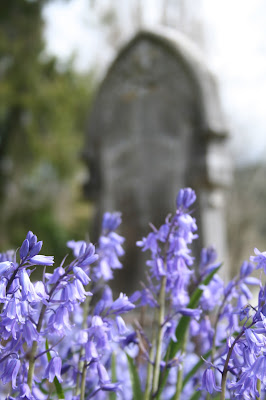 West Bank Dave
Motueka, New Zealand
Retired, and savouring after many years in the tropics, the seasonal changes. All photographs and content are Copyright.